The Graph Shows the Trend 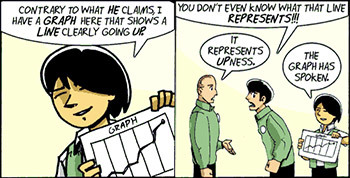 To demonstrate how some situation has been progressing, a line graph is brought out as a prop, showing a line clearly proceeding upward or downward. The axes may be unlabeled, especially in parodies. Sometimes someone realizes the graph is on the easel pointed in the wrong direction and fixes it, and now the line is going in the opposite direction. In comedy uses, the line is sometimes drawn out Off the Chart and goes into the ceiling or floor, or just lies there in coils.