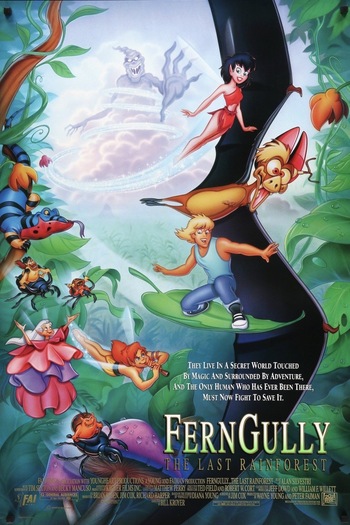 If there were a Holy Trinity of Aesop-y children's animation of the early '90s, it would consist of Captain Planet and the Planeteers, Cartoon All-Stars to the Rescue... and FernGully.

FernGully: The Last Rainforest is a 1992 animated film produced by Kroyer Studios, Youngheart Productions and FAI Films, and distributed by 20th Century Fox, and is based on the children's book of the same title, written by Diana Young.

It takes place in an Australian rainforest (though, strangely, none of the humans even try to fake an Australian accent). Within is the titular Magical Land, "FernGully", which is inhabited by a wide variety of Fairy Creatures. They are led by the wise Magi Lune (Grace Zabriskie), who is currently teaching her young protege, Crysta (Samantha Mathis), the secrets of the forest. Here, Fairies believe that humans are extinct, having been last seen fleeing an attack by the spirit of destruction, Hexxus (Tim Curry). One day, while enjoying the forest with her suave boyfriend Pips (Christian Slater), curious Crysta ventures outside FernGully, and accidentally discovers a human logging operation. After meeting an insane fruit bat named Batty Koda (Robin Williams), and accidentally shrinking one of the humans, Zak (Jonathan Ward), down to her size, Crysta has to face the accidentally released Hexxus, who lives off pollution and threatens to destroy the forest.