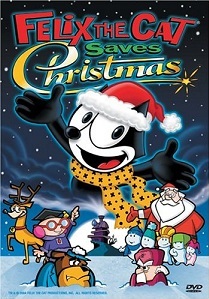 Felix the Cat Saves Christmas is a 2004 direct to DVD film, produced, written and directed by Don Oriolo and starring Felix the Cat, with the story being set in the Joe Oriolo incarnation of the series.

The film starts with Felix arriving in town on a train, heading to Poindexter's house to spend Christmas with him. Poindexter is busy reading a book by the fireplace in his house, and tries to find another book to read from his library, but gets disturbed when Felix rings the doorbell. Poindexter finds Felix frozen outside, but brings him in to thaw him out. Poindexter offers Felix a present—a book on Sodium Phosphate Potassium Nitrate & Other Fun Chemicals. Felix reluctantly accepts the gift (but tosses it aside when Poinsy isn't looking) and whistles for his Magic Bag, which comes down from the chimney. Felix pulls out a present for Poindexter out of it—which turns out to be a mere snowball. Felix uses this to trick Poindexter into playing around with him in the house. Meanwhile, the Professor is spying on the city in his lab (with Rock Bottom eating dinner nearby), bitter about the Christmas spirit in the air. Bragging about how he's been a rotten person ever since he was a child, planning evil deeds while other kids played in the snow and got toys, he decides to ruin Christmas for everyone by using a Snow Making Machine, which creates a winter storm so strong that it would keep Santa Claus from delivering presents, thus forcing Christmas to be cancelled. Felix and Poindexter get the news of the bad weather, and decide to travel up to the North Pole with Poindexter's rocket plane to help Santa out and save Christmas, with Professor and Rock Bottom trailing behind them, trying to stop them from foiling their plans...

To date, this film is the last piece of animation starring Felix the Cat, being one of three direct to video films that were planned, but ultimately ended up the only one getting made. It was also the last Felix work made by Felix the Cat Productions before the series was sold to Dreamworks in 2014 (and then acquired by NBC/Universal in 2016 when they bought out Dreamworks).