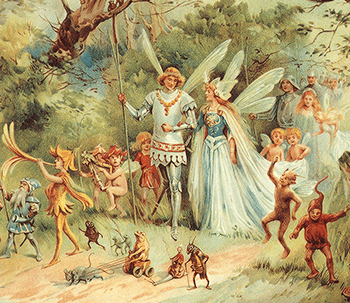 "Arrival of the King and Queen of Fairyland", E. Stuart Hardy
Advertisement:

While The Fair Folk are often portrayed as mysterious and chaotic, they are often ruled by an aristocracy, a court of noble fairies or archfey. As Our Fairies Are Different, the lords of the Faerie Court range from standard humanoid aristocrats to straight up demigods with immense magical power. A common archetypical story involves The Hero stumbling into a forest (or portal to the Land of Faerie) and encountering a fairy lord or lady, who grants them favor. Such favor typically involves great power, but often at a great price.

The most common courts from traditional legends are the Seelie or Summer Court, and the Unseelie or Winter Court. The Seelie consists of more benevolent fairies, while the Unseelie consists of more malevolent, demon or goblin-like figures. However, some folklore and many modern works depict the difference between the two as purely aesthetic. Due to the Lighter and Softer trend with depictions of fairies, modern depictions may depict members of the fairy court as Princess Classic or Benevolent Mage Rulers ruling The Good Kingdom.

Sub-trope of Supernatural Elite. Sister trope of Demon Lords and Archdevils. Will usually preside over the Land of Faerie.