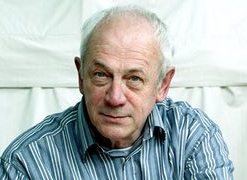 Alan Garner, OBE (born 17 October 1934) is an English novelist who is best known for his work in children's fantasy and his retellings of traditional British folk tales. His work is firmly rooted in the landscape, history and folklore of his native county of Cheshire, North West England, being set in the region and making use of the native Cheshire dialect.

He received a lifetime-achievement World Fantasy Award in 2012.