Literature / War for the Oaks 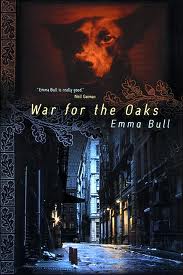 A fantasy novel by Emma Bull and one of the pioneering works of Urban Fantasy, War for the Oaks is the story of Eddi McCandry, a Minneapolis rock singer who's just quit her band and broken up with her boyfriend. There's also the matter of The Fair Folk moving in — quite literally — with her, and an impending war between the Seelie and Unseelie Courts into which she's just been drafted.