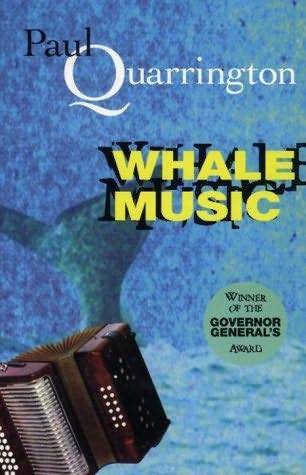 Whale Music is a 1989 novel by Canadian author & musician Paul Quarrington. It tells the story of Desmond Howl, an eccentric aging rock star who has been a recluse since the death of his brother and bandmate Danny and spends his time composing and recording his "whale music"; that is, music he hopes the whales swimming around his waterfront mansion will listen to. One day he comes upon a mysterious young woman named Claire sleeping in his house. Over the course of their relationship, he begins to come out of his shell and engage with the outside world again.

The book was well-reviewed, with Penthouse magazine notably naming it "The best novel written about rock 'n' roll." It won the 1989 Governor General's Award for English-language fiction, and was nominated for the 1990 Stephen Leacock Medal for Humour (losing to W.O. Mitchell's According to Jake and the Kid).

An award-winning Film of the Book was made in 1994, featuring the music of Canadian art-rock band Rheostatics. You can view the film here