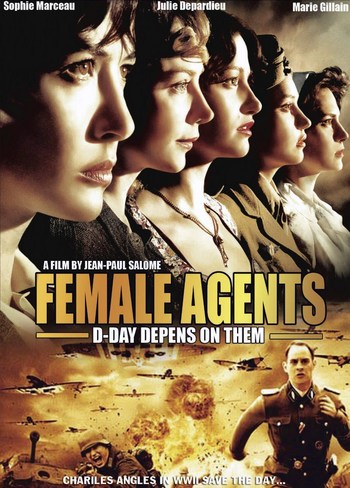 The film opens with French Resistance fighter Louise Defontaines (Marceau) fleeing to Spain after an operation where her husband is killed. She is expatriated to London, where she is recruited by the Special Operations Executive (SOE) and sent on a mission to rescue a British geologist trapped in France disguised as a German soldier. He is preparing the invasion of Normandy, so therefore if German intelligence can find this out the entire D-Day attack could fail. Louise is tasked to form a team of female operatives for this operation along with her brother Pierre. By a mix of bribery, threats and appeals to patriotism she assembles them. The first is Suzy Deprez (Gillain) a former cabaret dancer skilled in seduction. The second is Gaëlle Lemenech (François) an explosive expert. Last is Jeanne Faussier, a prostitute capable of cold-blooded murder. After they parachute into Normandy, they are joined by Maria Luzzato (Sansa) a Jewish Italian radio operator. The mission is at first a success, and they skillfully rescue the geologist. They are then given new, even seemingly suicidal orders-to eliminate Colonel Karl Heindrich of the SS, who has learned too much of the planned invasion.