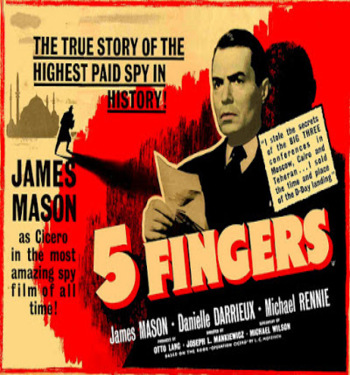 5 Fingers (1952) is a World War II spy film directed by Joseph L. Mankiewicz, starring James Mason, Danielle Darrieux, and Michael Rennie. It's based on the true story of Elyesa Bazna, a spy who posed as the British ambassador's valet.

Ulysses Diello (Mason), the suave, amoral valet to the British ambassador in neutral Turkey, plans to get riches and status by passing Allied secrets to Nazi Germany. He is given the codename "Cicero" by the Germans.

It was very loosely adapted into a 1959 TV series, also called Five Fingers.

Not to be confused with the 2006 film or 2012 Korean series, both of which have the same title.