Film / The Man Who Never Was 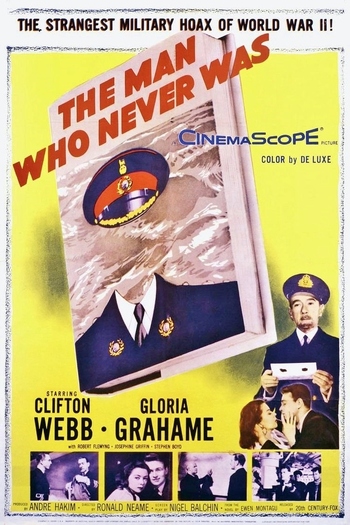 "Last night I dreamed a dreary dream, beyond the Isle of Skye,
I saw a dead man win a fight, and I think that man was I."
— The Battle of Otterburn, Scottish ballad
Advertisement:

This 1956 British espionage thriller, directed by Ronald Neame and starring Clifton Webb and Gloria Grahame, is the story of a World War II plot to deceive German intelligence regarding the then-imminent invasion of southern Europe by the Allied forces.

This was to be achieved by allowing a dead body, dressed as a British officer named William Martin, to wash ashore in southern Spain carrying "plans" for the invasion (which the Germans were expecting anyway), in the hope of making the enemy think that he was a courier who had drowned en route. Spain was technically neutral but friendly to Germany, and would certainly allow them to obtain a copy of any documents on the body, but they would also hand the body back to the British if asked, and so offer the Germans just a couple of days to handle the original documents and possibly investigate the body in detail. To make it all work, the British invented a Backstory about Major Martin's career, tastes, private life, etc., designed to provide enough detail to convince the enemy that their windfall was genuine.

The story focuses to a large degree on the technical aspects of "inventing" a person that the enemy can believe is real and much of the pleasure comes from that. However, in making the movie, some extra elements are put in to flesh out the plot. This is an interesting movie and as well carries some of the "atmosphere" of a traditional British World War II movie.

The true identity of 'Major Martin' was a closely-guarded secret for the duration of the war; his body was obtained on the condition that his name never be revealed publicly. It wasn't until 1998 (a full 56 years later) that the British government added a dedication to 'Glyndwr Michael' (a semi-literate homeless man with no surviving family) on 'Major Martin's' tombstone.

Contains such tropes as: