Film / The Man with One Red Shoe 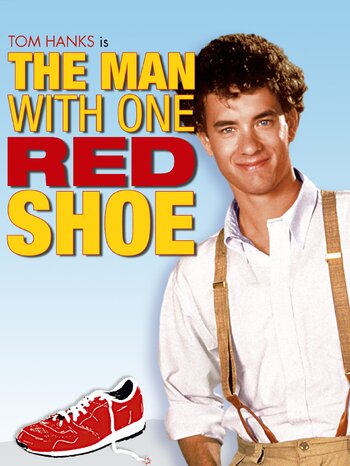 When an ambitious deputy director frames the head of the CIA in a drug smuggling operation gone wrong, the director leaks info that a star witness will be coming into town, and sends his right-hand man to the airport to make contact. The so-called witness is a dupe picked at random based on a signal made up on the fly.

That man is Richard Drew, concert violinist and title character. When the deputy director takes the bait, coming to increasingly paranoid conclusions based on completely innocent aspects of his life, Drew is dragged into a deadly espionage battle, complete with Femme Fatale, wiretaps, tailing agents, and multiple assassinations.

Sounds like a gripping Hitchcockian thriller, doesn't it? Actually, it's a comedy starring Tom Hanks.

Directed by Stan Dragoti and released in 1985, The Man with One Red Shoe is an American remake of the 1972 French film The Tall Blond Man with One Black Shoe, in which comedian Pierre Richard played the role later given to Hanks. It plays with many standard spy thriller tropes, and features a supporting cast including Dabney Coleman, Lori Singer, Charles Durning, Carrie Fisher, Jim Belushi, Edward Herrmann, David Ogden Stiers, and David Lander.