Film / The Man with the Iron Heart 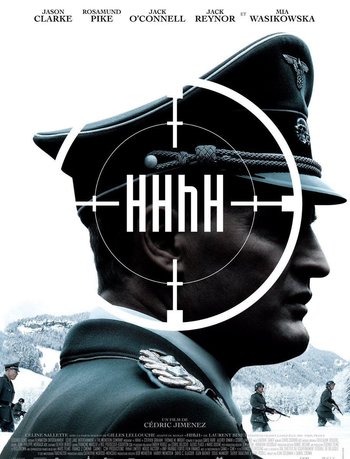 "You know what the Führer calls him? The Man with the Iron Heart."
Advertisement:

The Man with the Iron Heart (French title HHhH) is a French historical war thriller and drama released in 2017, directed and written by Cédric Jimenez, and also written by David Farr and Audrey Diwan. It is based on French writer Laurent Binet's novel HHhH and focuses on Reinhard Heydrich, his rise as one of the most influent and sinister leading figures of Nazi Germany and his assassination in German-Occupied Prague during World War II by a British-trained Czechoslovak commando.

The film's and novel's French title, HHhH, is an acronym that means "Himmlers Hirn heißt Heydrich" ("Himmler's brain is called Heydrich"), a joke said to have circulated in Germany at the time.

The film stars Jason Clarke as Reinhard Heydrich, Rosamund Pike as Lina Heydrich, Jack O'Connell as Jan Kubiš, Jack Reynor as Jozef Gabčík, Mia Wasikowska as Anna Novak and Stephen Graham as Heinrich Himmler. It was shot in Prague and Budapest from September 2015 until February 2016.

See also and compare Hangmen Also Die! (1943), Hitler's Madman (1943), Operation Daybreak (1975) and Anthropoid (2016), all about the same historical events. The latter only covers the operation and aftermath from the point of view of the Czech commando.

Not to be confused with the Harry Turtledove novel. Both works share Heydrich's moniker as title, but the novel is Alternate History fiction while the film follows historical events.