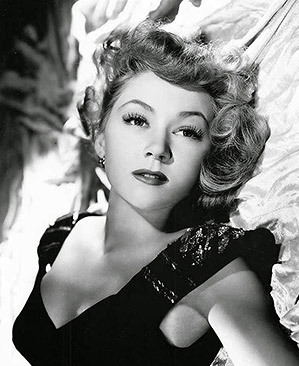 "It wasn't the way I looked at a man, it was the thought behind it."
Advertisement:

Gloria Grahame Hallward (November 28, 1923 – October 5, 1981), known professionally as Gloria Grahame, was an American stage, film, and television actress who was best known for her screen portrayals of sulking and occasionally wisecracking blondes.

During her long Hollywood career, Grahame appeared in more than 30 films, usually in supporting roles. She was nominated for Academy Awards for her performances in Crossfire and The Bad and the Beautiful, winning for the latter, and was also noted for her appearances in such films as It's a Wonderful Life and The Big Heat.

Grahame's film career declined in the late 1950s, as she devoted herself to raising her children. In the '70s she made occasional appearances in films, and also played parts on television and the stage, including a role in The Man Who Came to Dinner in 1977.

She was married to director Nicholas Ray... and after the marriage ended, she married his semi-estranged son from his first marriage, Anthony Ray. In fact, the marriage with Nicholas ended after Nicholas caught Anthony and Gloria in bed together. You can't make this stuff up.

Grahame got diagnosed with breast cancer in 1974, but after a year of treatment, it went into remission, and she returned to work. The cancer returned in 1980, but this time Grahame stubbornly refused to accept the diagnosis or seek treatment, opting instead to continue working. Her health, however, declined rapidly and she eventually passed away due to complications from cancer in October 1981.