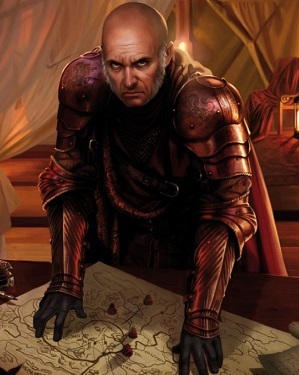 "Some battles are won with swords and spears, others with quills and ravens."
"It is only one who is thoroughly acquainted with the evils of war that can thoroughly understand the profitable way of carrying it on."
— Sun Tzu, The Art of War
Advertisement:

In a supporting role, the Strategist is basically The Smart Guy on turbo, although they will — as a general rule — be less likely to physically partake in any of the plans they think up. The heroes may come to rely on The Strategist for their ultimate success, and, as such, will have to protect and keep The Strategist as far away from the front lines as possible. The loss of The Strategist might come across as an unmitigated disaster, should the heroes come to rely on his or her advice too much. Also, there's no guarantee that The Strategist won't turn out to also be The Chessmaster, manipulating both the heroes and the villains towards some mysterious and personal goal. This will almost never be the case, however, as The Strategist very rarely wants power for him- or herself; the sheer joy of being given a venue where they can stretch their intellectual muscles and try out their plans is often reward enough for their loyalty and service.

The Strategist may also take center stage. As a hero, The Strategist's clever tactical tricks drive the story. A main character Strategist will face overwhelming odds, again and again. The enemy may have difficulty believing The Strategist can possibly win — after all, they're outnumbered 25 to 1 and have a moron for a boss! But by bending the rules a little, dusting off their knowledge of military history, and maybe pulling a few dirty tricks, The Strategist comes out on top, or at least alive.

The Strategist may have TV Genius tendencies, but they will just as often be charismatic, knowing that, by acting so, they'll have an easier time convincing others to follow their plans.

In many sport stories, The Strategist will be a highly-talented player who also devises strategies or helps the coach do so. Often, said characters have weak health, so they're only allowed to play for a limited time, or aren't called into the games unless the team is in a tight pinch. They're also likely to hold quite the degree of power inside of the team, possibly as captains or assistants...if not coaches.

The Svengali is usually this in his dealings with the general public on behalf of his protégé(s).

In games, players who want to be Strategists are a widely recognised Player Archetype, making this a sister trope to other such archetypes; naturally, some are better planners than others.

Due to his age and his affinity to sloth mantra, Kalrow prefers not to fight anybody directly and manages his Purification Troops from a distance.

Due to his age and his affinity to sloth mantra, Kalrow prefers not to fight anybody directly and manages his Purification Troops from a distance.