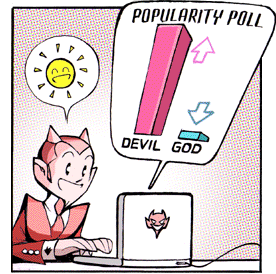 "Villains who twirl their mustaches are easy to spot. Those who clothe themselves in good deeds are well-camouflaged."
— Capt. Jean-Luc Picard, Star Trek: The Next Generation, "The Drumhead"
Advertisement:

Worthy Opponents, Enigmatic Minions, Punch Clock Villains and other types of sympathetic antagonists often find themselves working for the well-liked villain, unaware of what their boss is really up to.

This villain may be portrayed as a hero (or the hero), and may even think of themself as the hero. Their villainous acts might even be portrayed as heroic. Alternative Character Interpretation may lead to viewing a story's hero as a Villain With Good Publicity. If this villain's been recognized as a good man for so long that they slowly begin to forget about being evil in the first place, it can lead into Becoming the Mask.

If you need to take down a Villain With Good Publicity, send in a Cowboy Cop, Knight in Sour Armor, or anyone else who's prepared to play dirty for the greater good — or perhaps organize an Engineered Public Confession to out them as a Straw Hypocrite. The Ideal Hero and other idealistic heroes, by contrast, have no idea how to deal with these guys. Either way, any hero attempting to take one of these guys on can end up as a Hero with Bad Publicity. A Guile Hero might have some luck setting up an Involuntary Charity Donation to deprive the villain of assets while being unable to retaliate without compromising their good publicity.

In some settings, the villain may actually have a plausible case for being considered a (sorta) good guy. If so, expect the setting to lean towards the "cynical" end of the Sliding Scale of Idealism Versus Cynicism. May use Too Funny to Be Evil as an affable PR tactic. Villains who win over the fans are Rooting for the Empire or Draco in Leather Pants.

This trope is much more common in real life than Card-Carrying Villainy. However, as an "Evil Trope", examples would quickly devolve into complaining, so No Real Life Examples, Please!