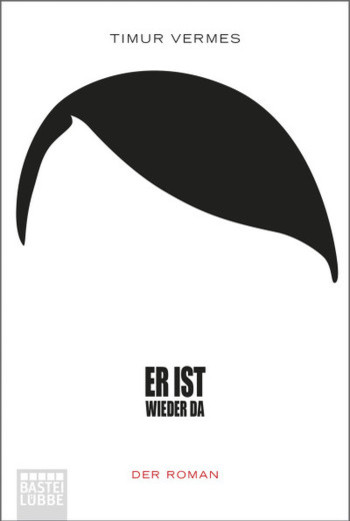 "It wasn't all bad."
—Adolf Hitler

Berlin, in 2011. Adolf Hitler wakes up on a patch of open ground, alive and well. Things have changed — no Nazi Germany, no Eva Braun, no bunker, no war. Hitler barely recognizes his beloved Fatherland, filled with immigrants, screens and obese people, and run by a woman.

People certainly recognize him, albeit as a flawless impersonator who refuses to break character. The unthinkable, the inevitable happens, and the ranting Hitler goes viral, becomes a YouTube star, gets his own T.V. show, and people begin to listen.

Hilarity Ensues... At least at first.

Er Ist Wieder Da (or Look Who's Back, literal translation: He's Back) is a darkly comedic book of political satire by German writer Timur Vermes from 2012, that casts a bemused yet cautionary glance at the modern day world and how its current circumstances aren't entirely dissimilar from those that allowed someone like (or in this case, someone who actually is) Adolf Hitler to come to power.

An international best seller, it has been adapted into a live-action film in 2015.

This book and film provides examples of: