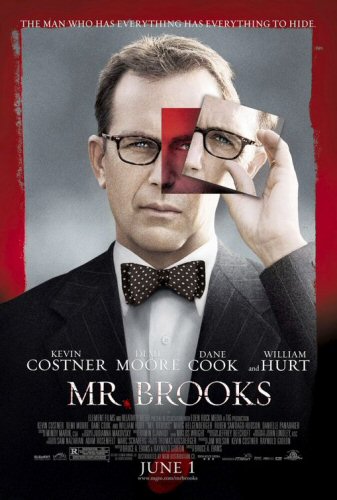 "I don't enjoy killing, Mr. Smith. I do it because I'm addicted to it. "
"The hunger has returned to Mr. Brooks' brain. It never really left."
Advertisement:

Earl Brooks (Kevin Costner) is a popular, humble, successful man with a beautiful wife and daughter, a thriving private company and a highly respected record of philanthropy, for which he was recently named the Portland Chamber of Commerce "Man of the Year".

He's also one of the most prolific serial killers in American history, and no one has ever come close to suspecting him of it.

Brooks is still quite a good man in many ways, and does his best to resist his lethal urges, frequently while being spurred on by "Marshall" (William Hurt), the psychological manifestation of Brooks' dark side whom only he can see. He manages to maintain this life relatively stably for many years until one day, after a relapse that leaves two people dead, Brooks is approached by an obnoxious, abrasive younger man going by "Mr. Smith" (Dane Cook). "Smith" happened to witness Brooks committing the double-murder, photographed it, knows he's the "Thumbprint Killer", and wants to blackmail him. However, not for money. "Smith" got a huge rush out of seeing Brooks' actions.... and wants to be taken along for the ride next time.

Tracy Atwood (Demi Moore), an extremely determined detective who has been attempting to solve Brooks's murders for years, seems to be getting closer, while going through a messy divorce and tracking another serial killer she previously caught, "the Hangman", who has now escaped. Brooks' family life is also getting more complicated as his daughter Jane (Danielle Panabaker) has just dropped out of college and moved back home, bringing an unexpected set of new problems with her.

Directed by Bruce A. Evans and released in 2007, Mr. Brooks is a coolly cerebral thriller filled with style and highly detailed substance, focusing on the skeletons we all have in our closets — and what we might do if they ever got out.