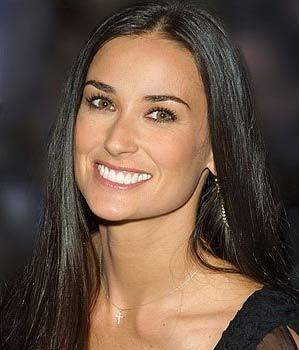 Demi Gene Guynesnote Sources are divided as to whether her birth name is Demetria or Demi. Moore says the latter. (born November 11, 1962), professionally known as Demi Moore, is an American actress, filmmaker, and model. After appearing on the soap opera General Hospital, she subsequently gained recognition for her work in Blame It on Rio (1984) and St. Elmo's Fire (1985) and for being part of The '80s Brat Pack clique. Her first film to become both a critical and commercial hit was About Last Night... (1986), which established her as a Hollywood star.

Moore starred in Ghost (1990), the highest-grossing film of that year, for which she received a Golden Globe nomination. She had a string of additional box-office successes in the early 1990s, including A Few Good Men (1992), Indecent Proposal (1993), and Disclosure (1994). In 1996, Moore became the highest-paid actress in film history when she was paid a then-unprecedented fee of $12.5 million to star in Striptease, a film that was a high-profile disappointment. Her next major role, G.I. Jane (1997), for which she famously shaved her head, was followed by a lengthy break and significant downturn in Moore's career.

Moore has married three times. She took her stage name from her first husband, singer Freddy Moore, whom she married from 1981 to 1985. She was married to Bruce Willis from 1987 to 2000 and had three children with him, the eldest of whom, Rumer, is also an actress. Her third marriage was to Ashton Kutcher from 2005 to 2013.

Tropes associated with this actress' works and portrayals in media: