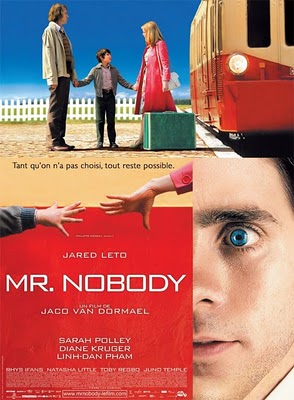 Mr. Nobody is a 2009 Science Fiction /Fantasy/Romance/Surrealist/Unclassifiable film by Jaco Van Dormael.

Jared Leto plays Nemo Nobody, the last mortal human in a future (specifically, 2092) where advancements in medical technology have cured us of the processes of old age and death. Nemo is 120 years old, and between psych examinations and an unofficial interview, he has quite the story(s) to tell...

One of those inexplicably unmarketed but impressively high-budget hidden treasures, the film was shot in Europe and Montreal in 2007, had its festival premiere in 2009, and was finally released in North America, on disc, in 2011.