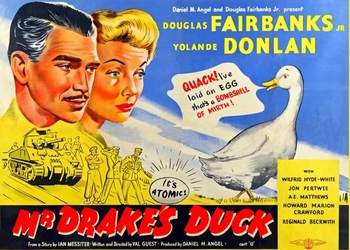 Donald Drake (Fairbanks) and his wife Penny (Donlan) are an American couple who inherit a farm in Sussex. One day, Penny goes to town with the farmhand Reuben (Pertwee) and through a wacky misunderstanding, returns home with five dozen ducks that she cannot return. The Drake couple tries their best to adjust with looking after their new farmyard ducks but discover that a hen has laid a uranium egg, leading to the armed forces arriving to quarantine the farm. Hilarity Ensues as the Drakes try to deal with living in the same house as Reuben, their handyman Higgins (Peter Butterworth), a loan officer and an official from the Agricultural Ministry.

Often known by many as one of Douglas Jr.'s last films in his career (and one of the last he ever did in his stint in the British film industry) Mr. Drake's Duck has been compared to the American sitcom Green Acres mixed with a non-romantic Screwball Comedy.