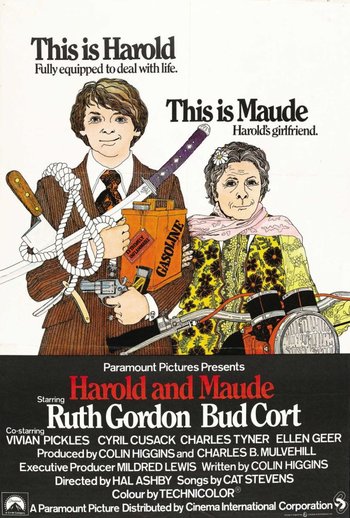 "A lot of people enjoy being dead, but they're not dead, really. They're just backing away from life. Reach out. Take a chance. Get hurt, even. But play as well as you can! Go team, go! Give me an 'L'. Give me an 'I'. Give me a 'V'. Give me an 'E'. L-I-V-E. LIVE! Otherwise, you got nothing to talk about in the locker room."
— Dame Marjorie "Maude" Chardin
Advertisement:

Harold and Maude is a 1971 film directed by Hal Ashby, starring Bud Cort and Ruth Gordon.

The film follows the exploits of Harold Chasen (Cort), a wealthy but morbid teenager whose primary interests include attending random funerals, driving around in a hearse, and staging gory and over-the-top fake suicides for his domineering mother. Then he meets Dame Marjorie "Maude" Chardin (Gordon), a sparky 79-year-old woman who shares his interest in attending funerals, and finds in her a kindred spirit despite their being apparent diametric opposites. Soon the pair enter into a most unusual May–December Romance.

While this film received mixed reviews and tanked at the box office on its initial release, it eventually developed a cult following and has gone on to influence people such as Wes Anderson, the Farrelly Brothers and other purveyors of cinematic quirk. It also features a memorable soundtrack by Cat Stevens, who worked closely with director Ashby.

Not to be confused with Maude, or the Harold & Kumar series.