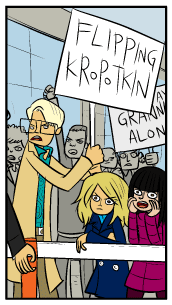 Down with this sort of thing!
"What a field day for the heat
A thousand people in the street
Singing songs and carrying signs
Mostly saying, 'hooray for our side'"
— Buffalo Springfield, "For What It's Worth"

In any mass public gathering, positive (on the campaign trail, during sporting events, to raise awareness) or negative (at protests and/or strikes), there's bound to be people waving signs around.

Truth in Television. In more humorous depictions, expect at least one sign to be completely irrelevant to the actual topic—"Hi, Mom", "Buy at Moe's", "I came to this rally and all I got was this stupid sign", etc. More serious ones may be the Powder Keg Crowd.

Often accompanied by a Slogan-Yelling Megaphone Guy. See also Torches and Pitchforks, for when the crowd gets too rowdy. Also The End Is Nigh.