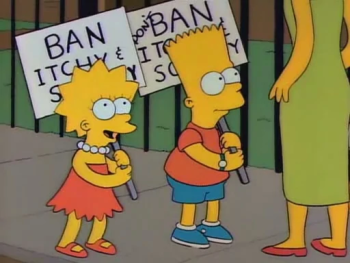 Marge leads a protest against The Itchy & Scratchy Show after Maggie whacks Homer on the head with a mallet, but viewer interest drops when the Itchy & Scratchy cartoons become Lighter and Softer and Marge gets branded a hypocrite when her anti-TV violence group wants to go after Michaelangelo's David for depicting male frontal nudity but she sees nothing wrong it.