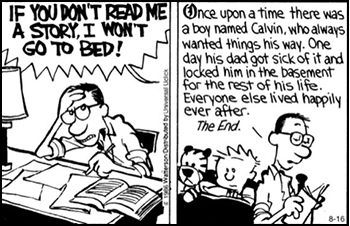 "I don't like these stories with morals."
"Enough! Here is the truest tale of all! There was an all mighty, all powerful wizard, and there was a pathetic little samurai. And the wizard destroyed him! THE END!"
— Aku telling his last story to children, Samurai Jack
Advertisement:

Sometimes characters just really hate each other. Whether it's because of a long-term rivalry, a bitter breakup, or just a falling out, they're at each other's throats. So, when one of these characters is given the opportunity to tell a story, they'll often use this chance to get their fictional revenge, inserting their enemy into the story and then doing bad things to them.

Often, this starts at the portrayal itself. The character is often written to be as unlikable and pathetic as possible, with their flaws exaggerated or falsified. Then, once the plot progresses, something will happen - if they aren't killed off, they're humiliated in some other way.

This is almost never subtle. It's usually a very thinly-veiled attempt to hurt someone else, without regards for actual proper writing and character-design. In some cases the story is entirely designed around this concept, making it as obvious and spite-driven as can be, even if there's technically more plot than just "my rival gets eaten by a bear". The reaction of the humiliated character will also be a big factor, as they usually catch on and protest their portrayal - especially if they're written as a awful parody of themselves. Sometimes, they may not even be aware that there's an issue until they find the story, and occasionally they retaliate with a story of their own. It doesn't necessarily need to be a written story, either; a common variant is for this to occur in a drawn comic instead.

This is usually Played for Laughs; the characterization will be cartoonish and the vengeance taken to comedic extremes, often with the character getting horrifically killed off or treated like an outright villain. However, serious examples do exist, and usually paint the storyteller in a more negative light- if not as an outright bully, as someone taking things too far. If the story is shared publicly, such as on a stage, it's more likely for them to be seen as the antagonist rather than the person they're writing about. Private stories usually get a pass for being personal wish fulfillment and Power Fantasy, lending themselves to a more comedic take.

Sister trope to Her Codename Was Mary Sue, and can appear alongside it. Compare "Rashomon"-Style, which usually involves characters casting others in a negative light in their own version of events. It can also overlap with Propaganda Piece, as those are often written with the intent to make someone look bad.

In-Universe Examples Only, please! This is about fictional characters having fictional beef, not real people venting through fiction. This is still Truth in Television though; Real Life fanfic examples belong on Revenge Fic or Ron the Death Eater. Similarly, the Roman à Clef novel is often used by imaginatively vindictive authors to "get even" with people they have a beef against, by writing them in as unappealing or unflatteringly described characters. Muse Abuse is when people incorporate real life people into their art in ways that offend everyone around them and cause them social damage.