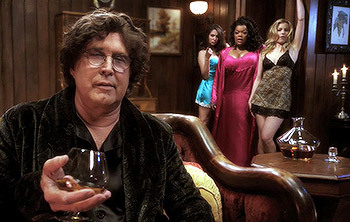 Magnum and his girls.

Britta is throwing a Halloween pre-party party before the study group goes to the actual party. Abed and Troy show up as the Inspector and the Constable and Jeff shows up as one of those Fast and Furious guys. When he goes to leave, however, Britta stops him and reveals the truth.

Remember those psychological evaluations Britta made everyone do? Well, she ran the numbers, and it turns out someone in the study group has homicidal tendencies. She claims that it's her directive as a psychology student to figure out this person and get them the treatment they need. The problem is that the tests were anonymous, so Britta devises a way to figure out the sociopath: tell scary stories, and see how everyone reacts.

One hour later, Britta has redone all the tests...and all of them except one reveal that the test taker is mentally disturbed. The group decides not to know which one is the sane one so they can all think it is them and leave for the party. Afterwards, it's revealed the sane test belonged to Abed.

This recap has a YMMV page