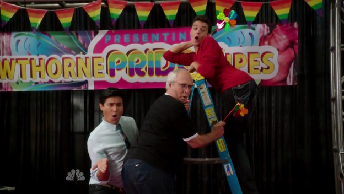 Now a silly one!

Pierce, initially annoyed to find that Hawthorne Wipes have become iconic in the gay community, embraces said community when he learns how much value they've brought to the business. He then reverses himself under pressure from his even more bigoted father.

Meanwhile, Troy finds himself being wooed by Vice Dean Laybourne and the secretive Brotherhood of Air Conditioner Repairmen.