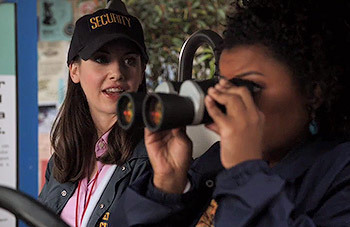 An April Fools Day prank goes wrong, and newly deputized campus security officers Shirley and Annie are on the case. Meanwhile, Jeff and Troy take advantage of Pierce's idiosyncratic beliefs about becoming a "level six laser lotus" in his "Buddhist" chapter to play a prank of their own.

The Community episode "The Science of Illusion" provides examples of: