Stop, or I Will Shoot! 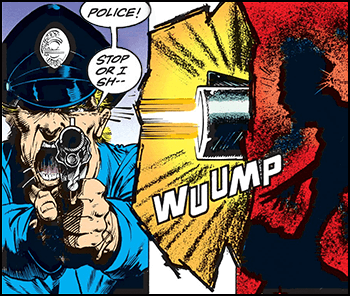 Well, he warned him!
Lothar: Freeze, motherfucker, or I'll kill you where you stand!
Eastwood: ...He's running faster.
Lothar: Ah, but he respects me.
— Exterminatus Now
Advertisement:

The phrase "Stop or I'll Shoot" embodies a common idea, popularized in fiction, that a police officer need only identify himself to a criminal suspect as an officer of the law, and that after this, if the suspect resists the officer, the officer is justified in containing the situation by any means he sees fit, up to and including deadly force.

This idea is flawed. In real life, police officers are required to use a reasonable amount of force, ideally the minimum necessary to contain a situation; they can't just begin shooting or swinging their nightsticks willy-nilly whenever a perp runs or tells them off, or even if a suspect fights back. Many, many lawsuits against police departments are grounded on the alleged use of "excessive force" and "Police Brutality". Indeed, in the United States, since 1985, police are not allowed to shoot a fleeing suspect unless he or she can be shown to pose a threat of death or dangerous injury to others.

However, in Hollywood, the instant a person defies a police officer, he automatically forfeits any protection against the Long Arm. As mentioned, this can include shooting him (typically, but not always, in the leg). This is the reason Suicide by Cop works so well in fiction (although, sadly, this has been used in real life as well).

Note that the police officer is justified in lethal force in some situations, as when a reasonably prudent person would conclude it was needed to save someone's life. So someone running away would not rise to this level, but someone driving away, and appearing to be ready to plow down someone in the street, would.

This is drifting toward Discredited Trope, as many current Police Procedurals depict cops using more realistic levels of force when needed; but it is by no means dead. Most often applied to Anti Heroes, whose willful use of excessive force is commonly met with disapproval from their peers or superiors, but it generally would not apply to military forces, a fascist state or other totalitarian regime, or to the Big Bad and his Mooks, as these would be expected to more freely employ deadly force. Also, given the modern-day threat of terrorist attacks and suicide bombers, various military forces may interpret 'continuing to move towards them without stopping when demanded to' as a potentially lethal threat all by itself, especially in high-security facilities or areas at war, such as Iraq. So when the Marine gate guard says "Halt or I will fire!", it is very likely that he means exactly what he just said.

This may also be a Justified Trope in historical or foreign settings, where the law (and public opinion) may have different views than present-day American citizens, legislators and media on what sort of force the police are justified in using to apprehend a criminal.

Occasionally used to demonstrate the badass level of whatever the cops are facing down when the villain does not stop and the cops do indeed shoot, only for it to have negligible effect.

A crook finds himself surrounded by guns when his usual attempt at escaping prison is thwarted by the player.

A crook finds himself surrounded by guns when his usual attempt at escaping prison is thwarted by the player.