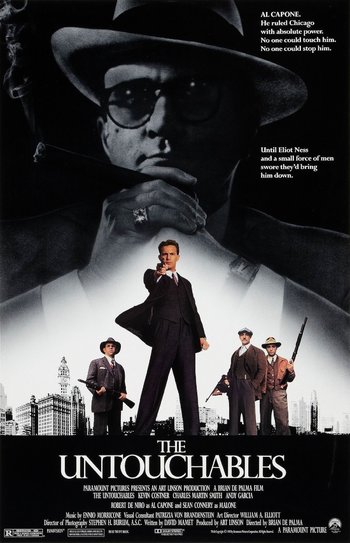 "He pulls a knife, you pull a gun. He sends one of yours to the hospital, you send one of his to the morgue! That's the Chicago way, and that's how you get Capone."
— Jimmy Malone (Sean Connery)

The Untouchables is a 1987 gangster movie directed by Brian De Palma and written by David Mamet. It stars Kevin Costner, Sean Connery, Robert de Niro, Andy García, and Patricia Clarkson in her screen debut. Connery won an Academy Award for his interpretation.

Based on the exploits of (Real Life) 1920s Chicago Prohibition agent Eliot Ness and his group of loyal agents, nicknamed "The Untouchables" because of their refusal to be bribed by the Mob as many others were at the time. Most notable for pursuing bootleggers and gangster Al Capone (and eventually arresting him—on tax evasion charges!)

The movie was theoretically The Film of the Series of the 1960s TV series, but Mamet ended up largely ignoring the TV series, going back to the original sources and crafting his own version of the story.