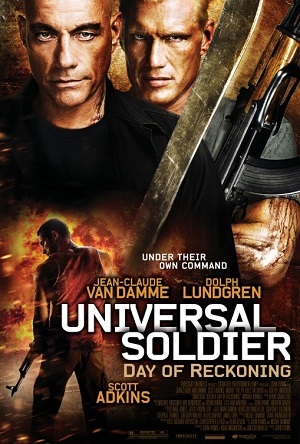 Universal Soldier: Day of Reckoning is the sixth movie in the Universal Soldier film series. It was released to video-on-demand services in October 2012, followed by a theatrical release one month later. Jean-Claude Van Damme and Dolph Lundgren return to reprise their roles as Luc Deveraux and Andrew Scott while frequent Van Damme collaborator and successor Scott Adkins stars as new protagonist John, a man who loses his family in a home invasion led by Deveraux. Warned by the FBI not to go after Deveraux himself, John does so anyway and begins to uncover a bigger plot being purported by unseen forces, leading him to a final showdown with the former UniSol.