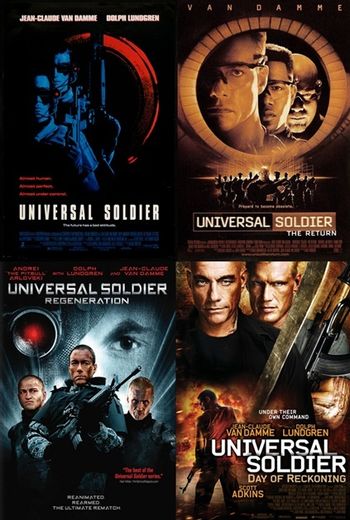 Universal Soldier is an action franchise starring Jean-Claude Van Damme and Dolph Lundgren. It encompasses six films (some of which are not canon).

The first film, Universal Soldier, centered around "UniSols," Super Soldiers made from the bodies of fallen U.S. soldiers brought back from the dead, and the conflict between two soldiers, Luc Deveraux (Van Damme) and Andrew Scott (Lundgren), who had killed each other in Vietnam, as they start to regain memories of their feud.

It was followed by two direct-to-video sequels in 1998: Universal Soldier II: Brothers In Arms and Universal Soldier III: Unfinished Business. Brothers In Arms has the UniSol program being used by mercenaries to smuggle diamonds, while Unfinished Business has Deveraux helping Veronica Roberts clear her name, while Deveraux's brother is cloned and turned into a new UniSol. These sequels featured none of the original cast or crew, and are largely considered to be inferior to the original.

Brothers In Arms and Unfinished Business were retconned out of continuity in 1999 with the theatrical release of Universal Soldier: The Return. The Return features ... the return of Jean-Claude Van Damme in the lead role.

The original film received a video game adaptation on the Sega Genesis and Game Boy - although it was just a Dolled-Up Installment of Turrican 2 with a few levels taken out and the Universal Soldier license added on.