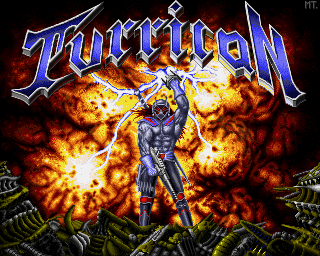 Turrican is a video game series that got started by Manfred Trenz. The original entry was first released on the Commodore 64, and then its successor, the Amiga.

It's The Future, and mankind has spread into space. Their sole protection from the scum of the universe is the United Planets Freedom Forces and its champion, (the second and third games name him as Bren McGuire,) equipped with the state of the art Turrican Powered Armour. The person wearing the mantle of Turrican varies, as do the villains. The series' two main antagonists are the three-faced computer MORGUL, and the evil cyborg/Galactus impersonator known as The Machine.

The series borrows elements of Super Mario Bros., Contra, Metroid and Psycho-Nics Oscar. The games were developed by the now defunct company Rainbow Arts. The levels themselves were massive with lots of secrets to find, like hidden power-up blocks and extra lives. Also, bosses at times didn't necessarily appear at the end of levels. They would show up in the middle of levels, and even the beginning at times. It also has an awesome soundtrack.

Although the parent company abandoned the series well over a decade ago, the series' cult status has inspired numerous fan-made sequels, such as T2002,

and the Game Gear game GGT.