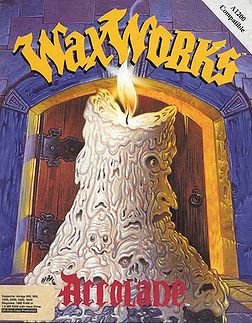 Descend Into Five Vast Worlds of Molten Terror!
PARENTAL WARNING!! Intense Graphic Violence! - A sticker on the game box (They MEAN it)
Advertisement:

After the success of their Elvira-based adventure games, HorrorSoft followed them up in 1992 with another point-and-click horror/adventure in the original IP Waxworks, which is so similar to the Elvira games that it's often considered a spiritual sequel.

The storyline was fairly simple: After the death of your uncle, he leaves you his wax works, a crystal ball, and a letter telling you that you must rid the family of a curse put upon it by Ixona, an evil witch from the distant past, which has affected them whenever twins were born. One twin turns out good, and the other evil. To defeat each evil twin, you must use your uncle's wax works to go back in time to four periods and locations: An Ancient-Egyptian pyramid, Victorian London — in which the evil twin is none other than Jack the Ripper — a cemetery teeming with zombies, and a vast mine shaft filled with plant mutants. If you can destroy the evil twin from each stage, you will be able to enter one final wax work, the Witch's lair, and rid the family of its curse for good. If you need assistance, you can speak to your uncle through the crystal ball for clues and tips.

But much like the Elvira games, the story is hardly the most memorable aspect. In addition to being Nintendo Hard, the game is notorious for having horrifically realistic and gory death scenes.

If this isn't the game with the most disturbing Game Over screens in history, then it is certainly a worthy contender for the title. It actually makes the Elvira games seem somewhat tame by comparison. That said, it's a great point-and-click adventure game. Just prepare like you won't believe... and you may wish to avoid eating during gameplay.

For those interested in the game, a longplay of the Amiga version can be found here

, and the game is available for sale as a download at Gog.com

An Indie-budgeted Video Game Remake of the game developed by Went2Play, Waxworks: Curse of the Ancestors, was released on Steam Early Access on January 8th, 2020, and saw a full release

on December 20th, 2021. The remake evolves the game from the original's Eye of the Beholder style grid-based mazes to modern fully three-dimensional environments.

Not to be confused with the film Waxwork, which had a similar premise.

Tropes specific to the remake: