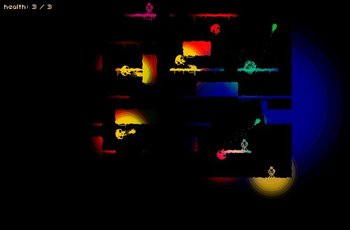 hets is a freeware roguelike platformer, released in August 2014 by dittoman. In it, every new game begins with the unnamed player character inside a dark cave, where they're greeted by a man telling them about the statues that have sent everything to hell ever since they were built. He tasks them to take his old gun and destroy all the statues, beginning with the three in front of you. This opens a portal, and sends the player to a second level, now with enemies out for your blood.
Advertisement:

Thus, all you need to do in every level is destroy the three randomly placed statues. They go down in one shot and cannot defend themselves: that's what the progressively increasing amounts of enemies are for, though killing them all is thankfully unnecessary. In between each level, you'll be offered a choice between three random upgrades the Man in the Cave had found while you were out fighting. Dying will obviously start it all again from the second level: you'll only have to watch the intro if you restart without getting killed. Another quirk is the ability to shoot directly upwards in addition to left and right, though downwards shooting is impossible. Last but not least, many platforms are much thinner than the rest, and so are permeable to your bullets, but also let the flying enemies pass straight through them.