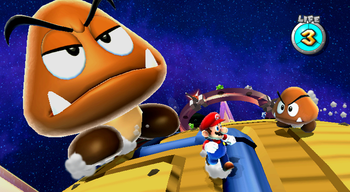 We're gonna need a bigger boot.
Frank Martin: ...You're the smart one?
Giant Mook: No. I am the big one.
(punches Frank through a brick wall)
— Transporter 3
Advertisement:

A minion or henchman too big, strong or tough to be an ordinary mook, but not interesting enough to be The Dragon, the Big Bad, a member of the Quirky Miniboss Squad, a King Mook or even an Elite Mook. Giant mooks usually require more effort to kill than ordinary mooks; the hero may need to land a series of nasty martial-arts blows before they sink to their knees (they don't go flying when you hit them). Sometimes they may seem too strong for the hero to kill, but then be fortunately (for the hero) caught up in a machine.

Giant Mooks often lead mook squads. Usually the laws of Mook Chivalry dictate that they attack alone, after their underlings have been easily dispatched.

If Giant Mooks are dragons, snakes, giants, or any other sort of scary animal or dumb big villain they will usually be the Right-Hand Attack Dog, which the Hero first has to slay before confronting the Big Bad himself.

The actors who play Giant Mooks in big-budget films may be well-loved as wrestlers or as Gentle Giant actors in TV shows or independent films, but they don't rate above a line or two and a violent death in a major production. If a giant mook actually receives characterization, he is The Brute.

Video games, particularly Brawlers, First-Person Shooter and Third-Person Shooter games, are full of these. Many of these monsters start out as the de facto boss monster of the game's first or second episode or segment, having their strength diluted in their appearances later in the game.

In videogames, compare and contrast King Mook, a boss which only has the appearance of a Giant Mook. Compare Smash Mook, The Brute, Elite Mooks, an upgraded squad of mooks, and Boss in Mook Clothing. Contrast Fake Ultimate Mook, which looks like a Giant Mook but goes down just as easily as anyone else, and Mini Mook.

A monstrous hybrid of Turian and Krogan, the Brutes are the latest and the biggest of the Reapers' troops.

A monstrous hybrid of Turian and Krogan, the Brutes are the latest and the biggest of the Reapers' troops.