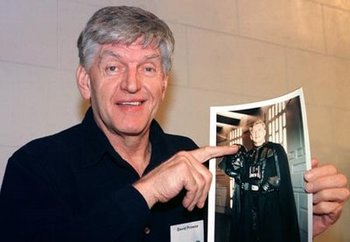 [On playing Darth Vader in full costume] "I do remember smiling quite a bit inside it though since I knew it wouldn't be seen on film - so of course while the poor planet is being blown up I'm smiling and laughing like mad!"
Advertisement:

He was best known for physically portraying Darth Vader in costume in the original Star Wars trilogy, helped by his height at the time (6ft7). However, due to Prowse's voice not sounding deep or intimidating at all (hear for yourself

He served as Christopher Reeve's personal trainer to get him into shape for the role of Superman in Superman: The Movie and its sequels, and he was also Cary Elwes' personal trainer for his role as Westley in The Princess Bride.

On a more trivia note, he left a mark in British culture as the first Green Cross Code man, a character aimed at children in road safety ads.