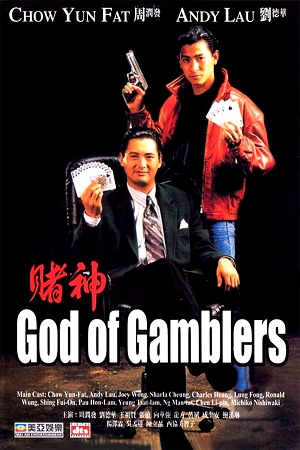 God of Gamblers is a 1989 Hong Kong action comedy-drama film written and directed by Wong Jing, and featuring an ensemble cast.

Chow Yun-fat plays Ko Chun, an extremely talented and well known gambler. On the eve of a big confrontation with a famous Singaporean gambler, Ko walks into a trap set by Knife (played by Andy Lau), an avid but a so-so gambler, meant for an Indian servant. Struck on the head, Ko suffers from amnesia and regresses to a child-like state. Knife, not knowing who Ko is, takes him in and gives him a name, the film following the pair's exploits as Knife exploits Ko's gambling ability.

The film would spawn several sequels and spin-offs, notably Stephen Chow's All for the Winner. Stephen would later appear in a movie alongside Andy Lau called God of Gamblers II reprising their respective roles. note not to be confused with God of Gamblers 2/Returns, considered to be the only true sequel to the original movie.