"This is a No Budget flick. Not a low budget, but a no budget!"
— Shecky Moskowitz 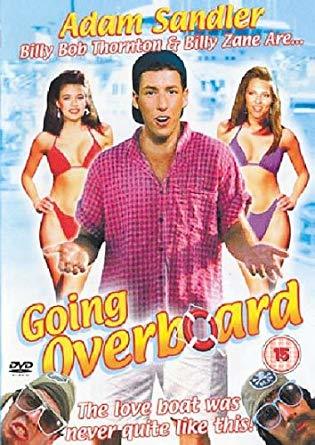 Going Overboard (also known as Babes Ahoy) is a 1989 No Budget comedy film starring Adam Sandler in his first ever movie role, two years before he became popular on Saturday Night Live. In this movie, Sandler stars as Shecky Moskowitz, an Idiot Hero who dreams of becoming a stand-up comedian on a New Orleans cruise ship. Unfortunately, he discovers the ship's comedian is actually a notorious jerkass named Dickie Diamond, who always gets the girls and is so jealous of Shecky. So Shecky struggles to become the ship's top comedian instead of Dickie.