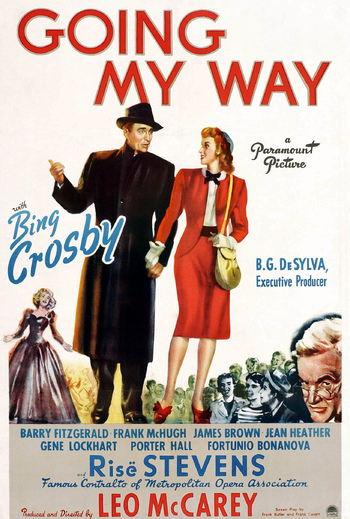 Bing is Father Charles "Chuck" O'Malley, a cheerful young priest from St. Louis who's brought East to turn around the fortunes of St. Dominic's Church, a parish in New York City. St. Dominic's isn't doing that well, with the church well behind on its mortgage payments and the mortgage holder threatening foreclosure. Parish priest Father Fitzgibbon (Barry Fitzgerald), a kindly man but set in his traditionalist ways, does not take well to Father O'Malley, who is easygoing and casual and does stuff like play golf. What Father Fitzgibbon doesn't know is that Father O'Malley has actually been designated to take over St. Dominic's, but in secret so as not to hurt Father Fitzgibbon's feelings.

Father O'Malley sets about trying to get the parish out of arrears. Other problems that arise include a parishoner who's being evicted from her apartment, a teenage runaway named Carol James who O'Malley extends a helping hand to, and the local gang of delinquent youths, whom O'Malley decides to make into the church choir.

Going My Way was nominated for ten Academy Awards and won seven, including Picture, Director, Actor, Supporting Actor for Fitzgerald, and Best Song for "Swinging on a Star". It was followed by a "sequel", The Bells of St. Mary's, which was actually written first.

Adapted into a 1962–63 TV series on ABC, starring Gene Kelly as Father O'Malley and Leo G. Carroll as Father Fitzgibbon.