Tear Off Your Face 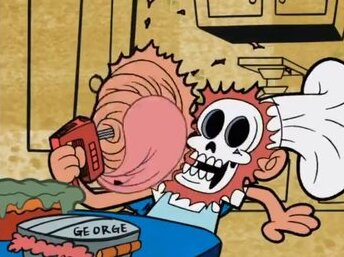 He'll be fine.
"GIVE ME YOUR FACE!"
— Optimus Prime, Transformers: Revenge of the Fallen
Advertisement:

There are few sights more gruesome than that of a human face with all the skin removed. Something about the absence of eyelids, lips, and the nose combined with the rather bloody results makes this an extremely powerful image. Sometimes, a character will have their face completely destroyed, while other times, their face will be cut off and preserved. The one who does the cutting may end up wearing the face for themselves. Note that simply damaging the face isn't enough — to qualify, the entire face must be removed, leaving only some combination of muscle, teeth, blood, bone, and (usually) eyes. In a more cartoony version, it's probable that only the skull will be left behind the face. Despite having just been deprived of lips, the victim's ability to talk will be rarely impeded.

Very much the scariest part of Flaying Alive, and often the M.O. of the Face Stealer.

Subtrope of Facial Horror. Not to be confused with the end of a "Scooby-Doo" Hoax (in that case, it's Dramatic Unmask).

Alternative Title(s): Tear Your Face Off