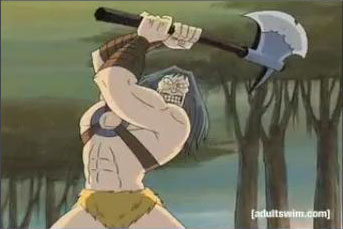 This is Korgoth...when he found out that Adult Swim had cancelled his show.
"The great cities have risen and fallen. Civilization's grip on Mankind has grown weak and arthritic. Dark forces seek to renew forgotten covenants. And primordial beasts reclaim the wilderness. Out of the frozen north, a man emerges! A man of a barbaric age, whose merciless savagery may be the only key to his survival! They call him...KORGOTH!!!"
Advertisement:

A classic example of What Could Have Been, Korgoth of Barbaria is a pilot that falls somewhere between being a parody and deconstruction of the Barbarian Hero, (especially Conan the Barbarian) with a lot of Black Comedy thrown in. The result didn't just cross over the line, it continually played hopscotch going back and forth over it.

The story takes place long After the End, in a world where magic, demons, mutants and prehistoric animals are mixed with the remnants of technology and precious little civilization. Korgoth appears to be stereotypical dim, brutal and violent Dumb Muscle from the frozen north, (although there are hints that he's smarter than he looks, well, at least, sometimes) whose direct and ruthless fighting style and extensive world experience makes him a perfect survivor in this Crapsack World.

The show begins with a group of mooks looking for Korgoth, and having been informed that he will be visiting a certain tavern as he passes through town, they head there. They attempt to approach him, but a combination of misunderstanding and the leader of the group being a massive jerkass results in Korgoth killing most of them before they manage to convince him to hear their master's offer of employment. Their boss turns out to be Gogmagog, a criminal kingpin Korgoth has had a falling out with after their partnership went bad in the past. Gogmagog wants the Golden Goblin, an ancient figure of mystery, which has long been in keeping of a wizard called Specules. Specules seems to have abruptly vanished and left his tower unprotected, leaving Gogmagog to believe the wizard is dead and the Goblin is ripe for the taking, as long as Gogmagog can beat any other interested parties to it.

Korgoth (who doesn't trust Gogmagog and makes it a general rule to not mess with wizards) is about to refuse and leave when Gogmagog reveals Korgoth's portion of the food they just shared contained a deadly parasite and only Gogmagog can supply the antidote. Now Korgoth has no choice but to make the long, dangerous journey to the tower of Specules, during which he will have to face many strange and lethal dangers...and then there's the tower itself.

Although the pilot was heavily hyped by Cartoon Network as part of its Adult Swim lineup and received a positive response from the fans, the network played an extended Will They or Won't They? game about whether they were going to pick up the show, and eventually despite many rumors flying that the show was going to become a full time series, the project died a quiet death. On November 2, 2013, Korgoth of Barbaria was aired on [adult swim]'s revived Toonami block as Daylight Savings Time filler, along with King Star King and Kick-Heart.

The show was ultimately never fully aired due to the quality of its animation and the associated cost, one staffer predicting the show would ultimately cost around a third of the [adult swim]'s budget. Despite excitement both in [adult swim] and in its viewer base, the money was seen as better spent elsewhere, and the show was never aired outside of its pilot. It would take another decade before creator Aaron Springer would eventually get a series of his own picked up, the more child-friendly Disney cartoon Billy Dilley's Super Duper Subterranean Summer, which features a Korgoth Expy called Zartran.

If you've never seen it, here's a short scene to get you started

. Just keep in mind that it's NSFW.

This pilot contains examples of: