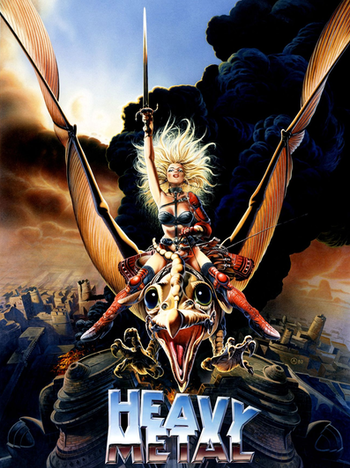 If you were looking for the music genre, go to Heavy Metal.

The 1981 Canadian-animated film anthology of stories from the magazine of the same name. Laden with sex, violence, profanity, decent animation, and a rippin' soundtrack.

The framing story for each short concerns the Loc-Nar (Percy Rodriguez), "the sum of all evil," a sentient, floating green orb that kills people by painfully melting them into goo or turning them into monsters (and a plot device that figures into each short), showing a young girl (Caroline Semple) its influence across space and time (after killing her astronaut father (Don Francks), who had just brought it back to Earth, de-orbiting in a classic Corvette convertible).

At the climax, Taarna's defeat of the Loc-Nar echoes, and the orb menacing the girl is destroyed. A purple bird of the same kind that Taarna flew arrives at her side, and she flies off, her hair turning white and the Taarakian crest appearing on her neck.

Once noted for Keep Circulating the Tapes because music rights kept it from being released on home video. Bootleg tapes of it would routinely turn up, some taped off airings on pay cable channels. Now legally available as well.

Plans for a new version of the film began to take shape in 2008, with lots of big names floated around to direct segments. However, the project fell into Development Hell, since nobody was interested in investing in it. However, in August 2011, Robert Rodriguez acquired the rights for a Heavy Metal movie and started the project over from scratch at his newly created company, Quick Draw Studios. This, too, would fall to the wayside as Rodriguez began focusing more on his own television channel.

In 2018-19, Heavy Metal publishing released a four-issue Taarna comic-book scripted by Alex de Campi, with art by Esau and Isaac Escorza. More comics starring Taarna by other writers and artists continued to follow.

At the 2022 San Diego Comic-Con, the Heavy Metal publications unveiled the creation of their own production company

, with plans to produce a slate of various series and films, both live-action and animated. Among the projects revealed to be in the works is a live-action Taarna, of which a test-reel was released.

The original 1981 film contains examples of: