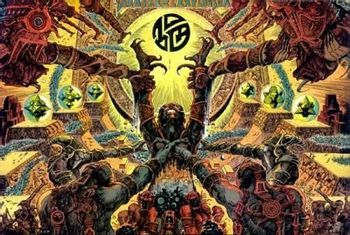 Philippe Druillet (born 28 June 1944), is a graphic artist of the French-Belgian school of comics.

An amateur illustrator since childhood, he grows up an avid cinephile and discovers the works of H. P. Lovecraft as a teenager. Working as a photographer, he meets Jean Boullet who initiates him to artistic drawing, painting, and the aesthetics of insanity.

In 1966, his first album, "The Mystery of the Abyss", is published. It introduces what will become his recurring hero, the space mercenary Lone Sloane. In 1969, he meets Jean Giraud and starts publishing his works in the illustrated weekly Pilote. His style becomes increasingly flamboyant and visually challenging; doing away with panels altogether, he fills the whole page with highly detailed and color-saturated drawings.

In 1974, feeling constrained by the editorial guidelines at Pilote, he leaves the magazine and, along with Giraud and Jean-Pierre Dionnet, he co-founds the alternative magazine Métal Hurlant (published in the US under the title Heavy Metal) and the publishing house Les Humanoides Associés.

His recurring main character is Lone Sloane, a drifter Anti-Hero who wanders throughout space in a Grimdark far future full of decadent civilizations and Eldritch Abominations. As a catharsis for his wife's struggle with—and eventual death from—cancer, Druillet writes the one-shot Night in 1975. This album is characterized, even more than the rest of his oeuvre, by a tone of darkness, despair and nihilistic pessimism.

His next major work, published in 1980, is the Salammbo trilogy, a Space Opera adaptation of Gustave Flaubert's eponymous novel, in which Lone Sloane is incarnated as the Carthaginian warrior Matho. After the turn of the 1990s, he becomes less active as a graphic artist, but, along with Mœbius, remains a reference for an entire generation of illustrators.