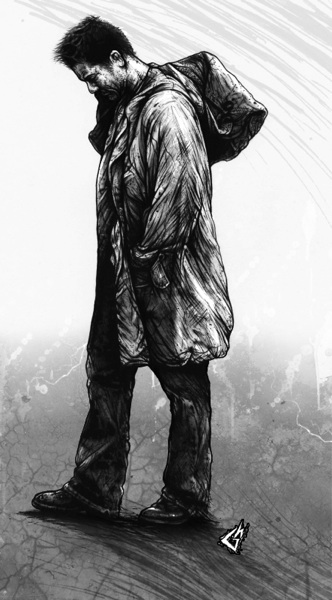 "There's a voice, that keeps on calling me.
Down the road, it's where I'll always be.
Every stop I make, I make a new friend.
Can't stay for long, just turn around and I'm gone again."
— The Littlest Hobo theme song
Advertisement:

Like a gust of wind, The Drifter quietly blows into a troubled town. He's low-key, and usually The Quiet One that's not looking for trouble. He'll rarely raise the interest or curiosity of the townspeople or the Big Bad that's been slowly draining the town of all life and money. Usually, he just wants an odd job to make ends meet before leaving again, the implication being that he's running from someone or Walking the Earth for the fun of it or for finding a good home for him/her/itself. Occasionally The Sheriff and his deputies, or a Quirky Miniboss Squad of the Big Bad (sometimes one and the same) will visit the Determined Homesteader employing the Drifter or him directly, to try and lay down the law and extort some money.

Then the gloves come off.

By this point, he's either got a personal stake in helping the meek townsmen chase off the Big Bad, like saving a hostage or other love interest, or will do it just because it's the right thing to do. An interesting twist on the above is that The Drifter is not just pretending he is Not Left Handed in terms of martial skill, but is also concealing his true purpose — to depose the Big Bad and his goons — hiding in plain sight as a mere Muggle to get information to bring him down.

In some variants, he'll be approached by the meek townsmen and appointed The Sheriff (the previous one having been run off or killed). He usually requires some convincing, in which the Big Bad helps out by kicking a few nearby dogs in The Drifter's presence. Once the Big Bad is defeated, expect him to lay down his badge, perhaps passing it on to one of the townspeople who showed some backbone in the fight. This is a hero who often faces the "Leave Your Quest" Test and agonizes over it each time.

He's a strange combination of traits: A Guardian Angel come to help a town that can't help itself, rarely grim but usually has a bit of The Stoic in him, or at least values few words. Sometimes a Technical Pacifist and former Gunslinger Walking the Earth. Though he's not a Knight in Shining Armor, he's usually several clicks above an Anti-Hero or Ineffectual Loner, being motivated by more compassionate standards than the Well-Intentioned Extremist. Once he's done, he'll probably have to go.

Fairly common in After the End settings, where he'll get a scavenger sidekick. Occasionally joins up or becomes the leader of a band of Hitchhiker Heroes. Closely related to the Knight Errant, who wanders the land actively seeking wrongs to right. The Flying Dutchman is often pressed into this role (though not always as a protagonist) by means of a curse.

No relation with Multi-Track Drifting at all, even if he is a Badass Driver. Nor with Thok, the white Piraka.

Bertie has been an outcast because of her obesity and extremely tall height, thus she has no place to call her home.

Bertie has been an outcast because of her obesity and extremely tall height, thus she has no place to call her home.