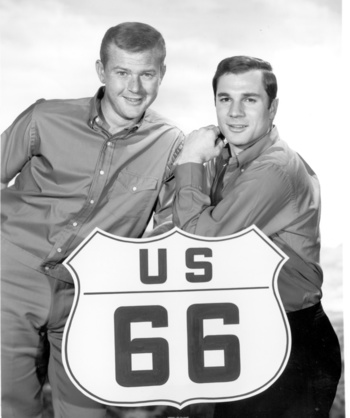 A 1960–64 drama series on CBS, created by Herbert B. Leonard and Sterling Silliphant and starring Martin Milner (later of Adam-12) and George Maharis.

The show's writing, much of it by co-creator Silliphant (who later wrote the classic Oscar-winning film In the Heat of the Night), could be clever, nuanced, and heartfelt. And its format, which was essentially that of an Anthology with two recurring characters, allowed Silliphant to explore a vast number of topics as he felt like it. However, whether due to a changed social landscape, the dawn of a more cynical age, or the fact that invariably any drama will have scenes that miss their mark, the show is also the victim of extensive Narm; it was made in a period that still falls thematically into the era exemplified by The '50s (as opposed to The '60s).

Route 66 is also notable for heavily subverting Hollywood Atlas stereotypes, as the series had a roving production set-up and episodes were filmed on location throughout Flyover Country.