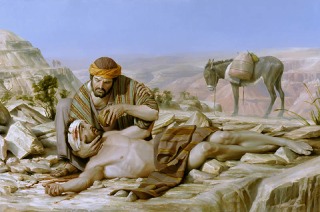 "Screw the sectarian venom, I'm doing what's right!"
"A man was going down from Jerusalem to Jericho and fell into the hands of robbers, who stripped him, beat him, and departed, leaving him half dead. ... But a Samaritan, as he journeyed, came to where he was, and when he saw him he had compassion on him. He went to him and bound up his wounds, pouring on oil and wine. Then he set him on his own animal and brought him to an inn and took care of him."
— Luke 10:31, 33-34, The Bible
Advertisement:

The Good Samaritan is a character who, despite owing nothing to the hero, helps them when they're at their weakest, often at risk or cost to themselves. There are many variations, but they generally follow this form: a wounded hero wanders in, and while others pass him by (or even further harm the hero), the Samaritan takes him in, tends his wounds and extends as much hospitality as he/she is able. This has the bonus of roping the hero into owing him/her a debt and giving him a reason to stick around the Adventure Town and fight off the Corrupt Corporate Executive threatening the Samaritan. Also, in a pinch, they makes an excellent Love Interest what with having proven he/she has got a heart of gold. (Good Samaritans who do not complicate the hero's life like that may come across as a Deus ex Machina.) If the Good Samaritan is much older than The Hero, they might become their Mentor.

Not coincidentally, the Samaritan is almost always a part of the blue collar or underclass of society. There's almost no such thing as rich Samaritans in fiction. Some have argued that the Samaritan from the original parable (see below) actually was fairly wealthy (since he brought the traveler to an inn and promised to pay the bill), but it's not really clear. And anyway, it could create Unfortunate Implications if someone in a privileged position sees others as helpless without them; see Condescending Compassion and White Man's Burden.

If the Samaritan follows the protagonist into the mêlée, expect him/her to be an Action Survivor to his Action Hero. Often overlaps with The Chick, Innocent Bystander, Determined Homesteader, and Heroic Bystander.

A nasty subversion is that the Samaritan hasn't taken in a Hero, but a Viper intent on doing him harm. If the villain the Samaritan helps is instead confused and curious at their generosity, it may lead to the Samaritan becoming their Morality Pet prior to a Heel–Face Turn.

A lot of Superheroes are considered to be Good samaritans taken Up to Eleven.

The Trope Namer is one of Jesus' parables from The Four Gospels, in which a Jewish man is mugged and left for dead and naked by the roadside. Two of his own people, a priest and a Levite (an entire clan of assistants to priests), simply walk past, and the only person who helps him is a Samaritan, who not only tends to his wounds, but brings him to an inn where he can recuperate, going so far as to shoulder his medical expenses. In a historical context, Jews and Samaritans are both Israelite ethno-religious groups which back in Jesus' day distrust each other at best, and at war with each other at worst (not unlike modern-day Jews and Arabs, both Semitic groups; nowadays Jews and Samaritans have more tranquil relations), each side claiming to adhere to a "pure," unadulterated form of the Israelite religion passed down from Abraham to Moses. Thus, in its day Jesus' story was pretty shocking to his Jewish audience in its emphasis on humanizing the "enemy". Indeed, in context Jesus is reciting this parable to a lawyer who asks him by what does the word of God mean by "to love thy neighbor" in order to enter into Heaven, emphasizing that one's "enemy" is still one's "neighbor". The closest trope to the above moral is probably I Was Just Passing Through. To further complicate the story, there are religious rules that prohibit contact with corpses, and the first two passersby may have assumed that the traveler was dead (though actually there are some exceptions to those rules, which may have applied here). The story shows that, when forced to choose To Be Lawful or Good, it is almost always preferable to be the latter. In many modern uses of this trope, the Samaritan will protect and heal the hero even if the hero is explicitly a hunted fugitive.

This Trope is often combined with No Good Deed Goes Unpunished (when a Good Samaritan is treated negatively or unfairly) or with Androcles' Lion and/or Character Witness (when what he does is rewarded).

Sub-Trope of A Friend in Need. See also Samaritan Syndrome. Compare with Bad Samaritan, this character's moral opposite.

When not massacring thugs, Toxie endears himself to the innocent people of Tromaville with good deeds.

When not massacring thugs, Toxie endears himself to the innocent people of Tromaville with good deeds.