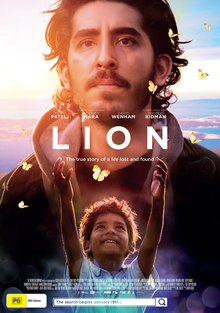 Lion is a 2016 movie directed by Garth Davis.

Based on a True Story, it is a film about a young Indian boy, Saroo, who is lost in a train station by his family in a faraway city where he does not speak the language. Unable to communicate where he's from or who his parents are, he is treated as an orphan and adopted to Australia. Only as a young adult, now played by Dev Patel, is he able to try to search for his family in rural India.