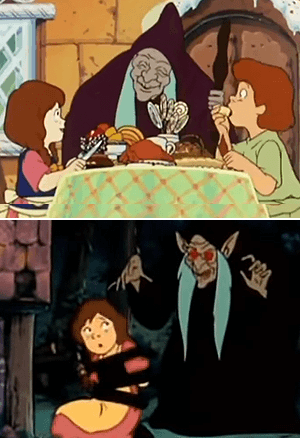 "And take extra care of strangers,
Even flowers have their dangers,
And though scary is exciting,
Nice is different than good"
— Little Red Riding Hood, Into the Woods
Advertisement:

Beware of the kindness of strangers.

A Good Samaritan provides help to anyone in need, even a complete stranger. They will come across the wounded hero and take him in, feed him and tend to his injuries without asking for anything in return. Sometimes these people are punished for their goodness because they were a Horrible Judge of Character and chose to help someone who would only repay them with evil.

And then there are these guys.

The Bad Samaritan is someone who takes in the hero and seems (at first) to be helping, all to do the hero harm in the end. He doesn't act out of the kindness of his own heart, but by some villainous motivation. He will keep his intention hidden from his victim, gaining their trust, until he has the hero helpless. This is the inverse of the Biblical parable about the Good Samaritan, teaching the audience that relying on the kindness of strangers is not always a good thing.

This is when a villain wears a mask of altruism and pretends that their goal is to help unfortunate, needy characters. They will befriend and offer them their assistance to win them over, secretly using them as pawns in their scheme. The good guys usually don't catch on until it is way, way too late to do anything about it and the villain has just put the final touches on the plot, revealing that the "help" was merely part of their evil plan all along.

This sort of ploy usually comes up when the hero wants something and is desperate enough to do anything to get it. The villain has just what the doctor ordered, and is willing to give it to the hero... for a price. And the price is always exactly what the villain needs to achieve his goals. The hero might have to give up something important to the villain, or may have to retrieve a Plot Coupon. Other times, the villain will maintain a cover of respectability and generosity in order to attract good guys who later unwittingly act as mooks for the villain's cause. And sometimes the villain is simply a cruel bastard and likes corrupting the thought of kindness by turning it into villainy.

Either way, in the end, it turns out that by accepting their assistance, the protagonist has been unwittingly playing right into the villain's hands. The end result of this flavor of the trope is usually You Have Outlived Your Usefulness, with the villain killing or otherwise betraying their cronies once they've served their purpose. Where this gets confusing is when the Bad Samaritan means no physical or emotional harm, but uses their "kindness" to provoke a "Leave Your Quest" Test to get the hero to leave the Big Bad alone.

Related to Beware the Nice Ones, Lending a Backhand and The Farmer and the Viper. Compare with Salvage Pirates, in which the hero expects help from people who turn out to be evil and who don't even pretend to help. See also All Take and No Give. See also Hostile Hitchhiker, specifically the "Harmful to Hitchers" type. Supertrope to Wise Old Folk Façade, where an evil elderly acts wise and helpful to others to hide their true nature.

After Paige gets into a car crash, Margarett rescues her and brings her to her home. When Paige wakes up, she's strapped down into Margarett's bed and she won't let her leave until she adds her character into her book.

After Paige gets into a car crash, Margarett rescues her and brings her to her home. When Paige wakes up, she's strapped down into Margarett's bed and she won't let her leave until she adds her character into her book.