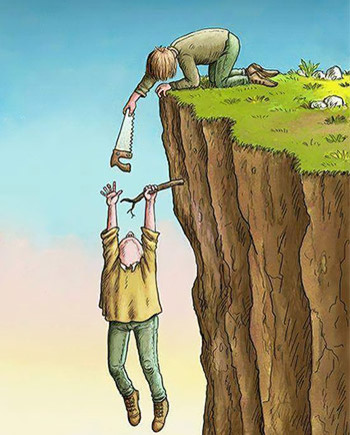 Sometimes a character in a story will want to inflict some kind of damage to someone else without arousing suspicion or losing good reputation. Lending a Backhand, or giving someone "help" that actually hurts them, is just the tool for this character. Reasons for this vary; perhaps a Starscream or Faux Affably Evil type wants to lull their target into a false sense of security, gradually weaken them, or gain their target's trust before making a power move, but whatever the motive, the Backhand is designed to hurt the recipient while appearing to help them on the surface.

Alternatively, if both parties are aware that the helper's up to no good, this could be used to mock someone in trouble: what better way to add insult to injury than offering "help" that really makes things go From Bad to Worse, claiming you're helping, and calling them an Ungrateful Bastard when they complain?

If a character made things worse but actually did intend to help, that's Unwanted Assistance or Well-Intentioned Extremist. If a character hurts another character to help them, that's Cruel to Be Kind or Tough Love. Compare Bait the Dog if it seemed like a character was about to help, but did the exact opposite instead. Also see Bad Samaritan.