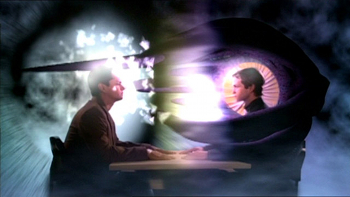 Tired of Mind Rape tentacles? Try Psychic Brain Bleach with refreshing mint strips!
Orpheus: Wait, there's something strange about you, doughy mystery man. I sense... [concentrating] the presence of...
Dr. Killinger: Your powers are useless on me, you silly billy.
[Orpheus screams, gets a bloody nose, and collapses on the floor]
Dr. Killinger: You have until noon tomorrow to vacate the premises. Good day.
— The Venture Bros., "The Doctor Is Sin"
Advertisement:

The Psychic Block Defense is a step up from Psychic Static, it stops an enemy using a Mind Probe, Telepathy, and various forms of Mind Control from getting at the owner's juicy brainmeats by putting up the mental equivalent of a Blue Screen of Death. It's a step up because it's always on, and slapping, distracting or KO'ing the defender won't shut down the defense. To continue the computer metaphor, this is to do with it being a "hardwired" defense rather than one that is executed after startup.

It comes in two flavors: specific memory blocks and full mind defense. The former is a passive defense used to protect sensitive secrets from enemies, and may even be doubly defended if the owner isn't aware he has them in the first place. The latter is (usually) a much more active defense from being taken over, it will give enemies a Poke in the Third Eye if they put their brains where they don't belong, and may even turn the tables and let the defender sneak into the invader's mind. A variant of the latter will simply No-Sell the mind reading attempt; no matter how hard the psychic tries to get at the person's mind, they get no feedback, and no success—the mind will likely read as a "blank".

One of the most impressive things about this trope is the variety of ways it can be represented. Frequently it manifests with a theme regarding the character's organization or whoever installed the block, as a form of signature. For example, a servant of the Milkman Conspiracy may have the details of their secret base protected inside an unbreakable mental milk bottle that can only open with a specific code phrase. Even a non-psychic can have one with the right training, or thanks to a friendly psychic installing one.

Inferior shields will allow the attacker to know you're hiding something. A better shield will leave an attacker uncertain, because the attacker won't know whether or not you're actually trying to hide anything. A really good shield may let the invader think he got access to what he was searching, and feed them false information. This is also the best defense to employ against something or someone trying to find you with Psychic Radar.

Insanity Immunity is a Sister Trope, where the immunity/resistance to psychic invasion or interference is due to inherent madness. If an attempt at mind reading or mind control results in nothing, that is a No-Sell. See also Immune to Mind Control and Battle in the Center of the Mind.

"Is this a staring contest?"

Reva uses her force skills to probe Leia's mind. She resists it and ask if Reva's doing a staring contest.

"Is this a staring contest?"

Reva uses her force skills to probe Leia's mind. She resists it and ask if Reva's doing a staring contest.